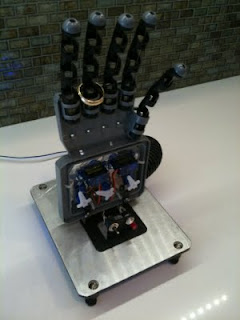 Using a PICAXE 18M2 uC, five servos, a few resistors and some random 'stuff' around the house, we built this robotic hand. Then we wrote some software to control the hand. Hardware wise, an input line on the PICAXE is held HIGH via a 10K ohm pull up resistor. This input line is pulled LOW upon pressing the red Normally Open button. While the PIXACE waits for a button press it happily generates random numbers that are associated with gestures the hand has been programed to perform. At the press of the red button the PIXACE uses that random number to call a gesture routine.

Here is a pic of the front of the hand. The toggle switch turns the rig on and off. You can also see the red button mentioned above. Note there are three servos mounted on the front side of a piece of plexiglass; two on the backside. 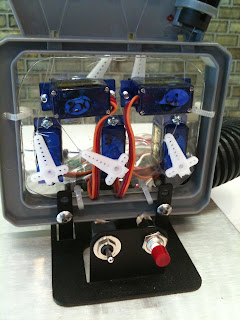 -----
This pic of the backside of the hand shows the two other servos. Wiring to the PICAXE is straightforward, but there are a lot of wires due to all the servos. Note the audio jack. That is actually a programming jack that allows you to download different software routines into the PICAXE and change the robot's personality. 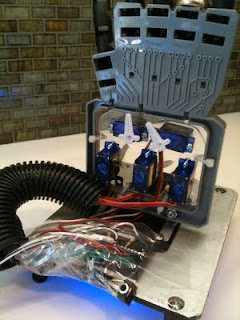 -----
You may have notice a soft blue glow under the platform that holds the robot hand. We rescued a blue LED from something we had around the house. When the rig is powered on (5.25VDC) this blue LED glows. 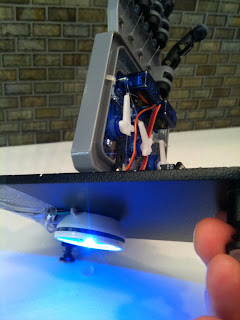 -----
The video below shows the rig in action on a few gestures. Like I said before, these come up randomly. Here is what we got:
-----
The awesome site HackaDay.Com featured the hand before we were complete.
-----
I'll send the source code to anyone that is interested in seeing it.
-----