Raspberry PI answers, "Is the internet up?" 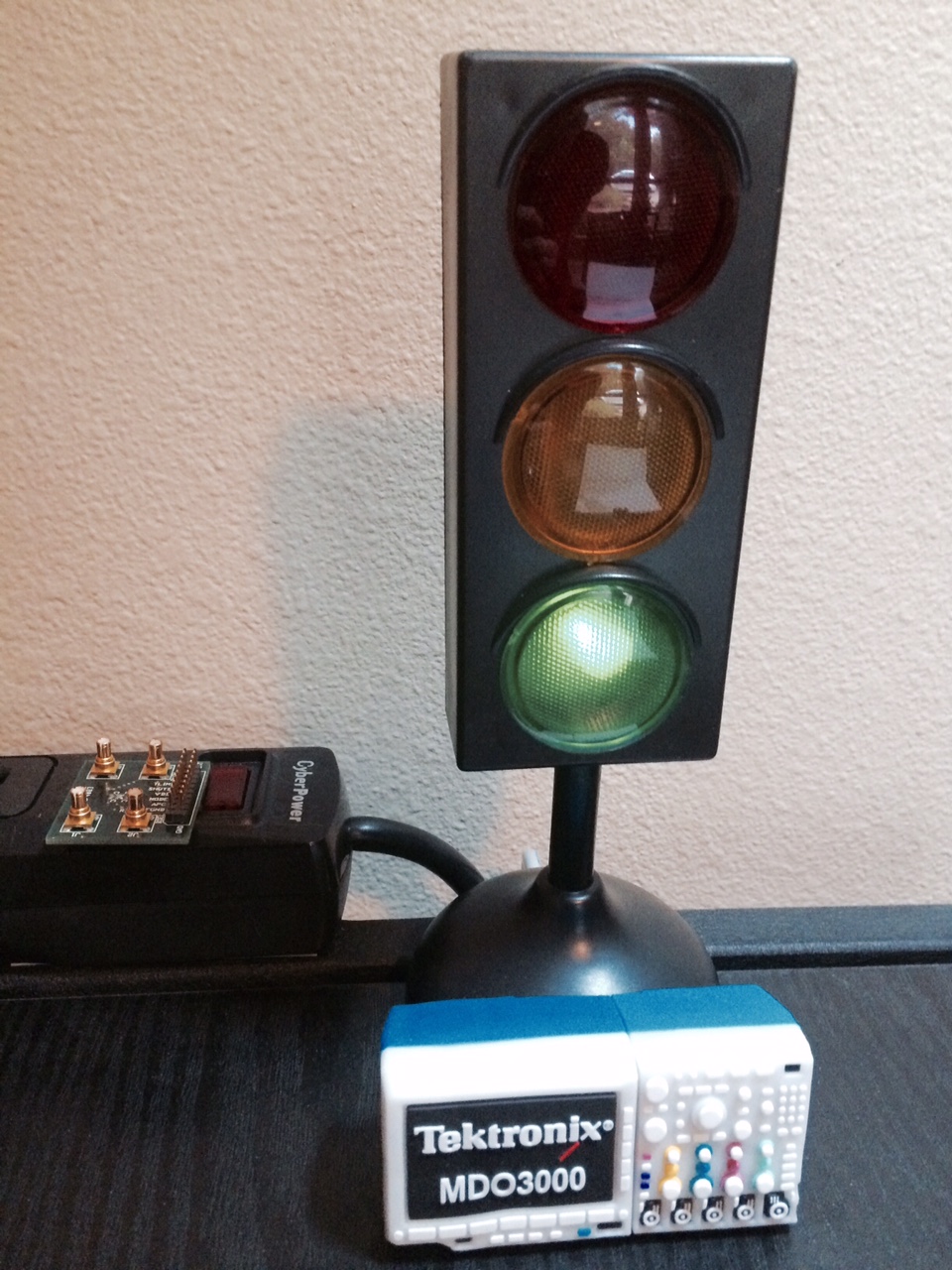 It is a pretty commonly uttered question (sometimes loudly) around the home or office; "Is the internet up?"  As the goto IT Support Manager around the house this can get a little tiresome.  Most of the time the internet is up and it's a user or personal device problem that can be solved with a re-boot, re-load, re-etc.  Sometimes the internet is really down requiring a router and cable modem reboot or a call to the ISP.  Wouldn't a simple visual check that anyone could quickly understand be helpful?  Plus, as a bonus, provide some general network health statistics with a screen print and an hourly update to a Google Drive spreadsheet.

This project is amazingly useful and incredibly simple to duplicate.  If you already have a Raspberry PI it is very cheap to implement.
-----
What it does and how it works:
The Raspberry PI runs a Python program that test pings 10 internet sites that you to determine to provide the status of your internet connection.

To make the program run faster and not burden the network with outgoing pings, all 10 sites are not pinged on each run.  The ping test rotates through the 10 sites.  If the selected site does fail the ping test, the program goes into "Deep Probe" and checks all 10 sites to determine the connection status.  "Deep Probe" runs are tracked for the status report that prints to the screen.

Each hour a status report is appended to a Google Drive spreadsheet via the Maker channel at IFTTT.Com.
-----
For a visual output we went with a device that anyone can identify with, a simple $8 toy traffic light from Amazon.  For $8 you get a lot.  The light is well build, looks great, and is a full 7" tall with three LEDs already installed.  It also comes with 12 little toy cars that you can give away; you don't need those.  Next remove the four screws at the bottom of the base.  You are going to see four wires that lead up to the three LEDs in the traffic light.  Cut those wires and free them from the little ON/OFF switch and microcontroller that was meant to control the blink patterns for the non-hacker.  Now you should only be left with four wires.  The LEDs are wired common athode (+).  The simple schematic below shows the hookup for each LED and their connection to the Raspberry PI.  Double check the wiring for your traffic light with a button cell battery to see what wire lights each LED. 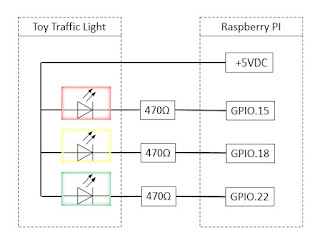 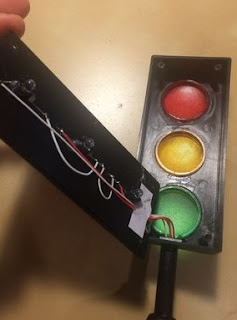 -----
After you wire in the toy traffic light it will look something like this: 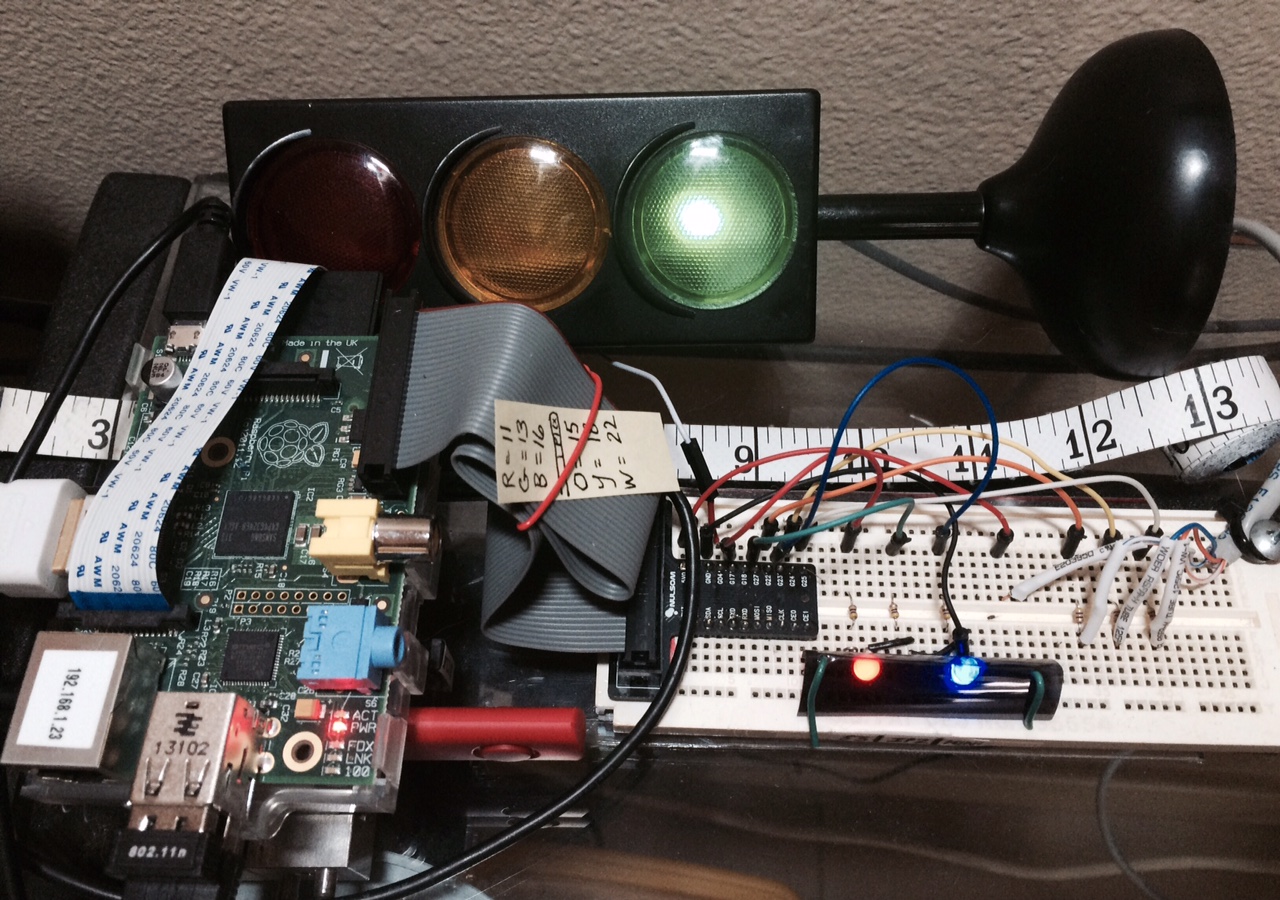 -----
Now you will need to load the Python source code provided below, but before you do, a few simple edits are required:
- Find in the code where it says "# Identify ten PING 'friendly' sites".  In that section put in ten IP addresses or DNS names that are "ping friendly".  Not all sites allow you to ping them, so test ping them manually first from a command line.
- Find the variable named "Delay_between_tests".  In the program it is set to 15 (for 15 seconds).  Adjust this if you want to test more or less frequently.
-----
That's about it, now run the program.  The RasPI will take the traffic light through an LED self test.  Then it will do an initial first run deep probe ping test on all ten of the test sites; the LEDs will self test during this as well.
-----
From then on the little toy traffic light will answer that all too common "Is the internet up?" question.  In addition, as the local IT Support Manager, you will have access to a running history in a Google Drive spreadsheet and the status output table below to impress your friends:

-----
Here is the Python code that makes it all work.  Of course, as mentioned above, you will need to supply your own list of ten ping friendly internet sites instead of "yourtestsite-1.com", etc.

# Set up for IFTTT triggering
import requests # needed to get https request to IFTTT web page
Current_hr = time.strftime("%H", time.localtime()) # use this var to update trigger IFTTT at each hour change
IFTTT_hr = "999" # we will only trigger IFTTT if this is diffent from Current_hr
MAKER_SECRET_KEY = "xxxx-my-maker-ifft-key-xxx"  #this is my IFTTT Maker Channel secret key

import RPi.GPIO as GPIO  # We will be using the RasPI GPIO to control the three LEDss
GPIO.setwarnings(False) # suppress screen from showing GPIO errors

#Adjust the LED status light and screen print a report

time.sleep(Delay_between_tests) #wait some before next ping test
-----
If you're still with us, thanks and if you duplicate the build let us know!