The Tale of Three USB Chargers 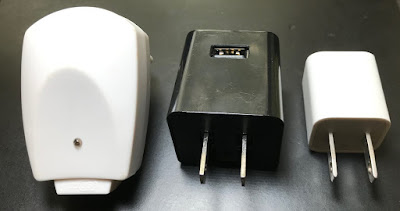 Everyone seems to have a box full of USB chargers.   Well, we do anyway and decided to pick two random "no name" chargers and pit them up against an official Apple USB charger.

The test setup was the same for each USB charger.   We swept a load that increases from 100mA until the USB charger went into protection (no voltage output).  We then checked EMI/RF Noise and 'vampire drain'.

EMI/RF Noise is a big concern.  EMI/RF can have a negative effect on WiFi, Bluetooth, ham radio, and pretty much any radio signal in the area.  Measuring with a Spectrum Analyzer the Apple was by far the most RF quite.  The White "no name" was extremely EMI/RF noisy with the Black "no name" being pretty bad as well.

"Vampire drain" or standby power is how much energy the charger uses when just plugged into the wall doing nothing.  The Apple won in this category as well.

My opinion, get the Apple or other well made USB charger and avoid the "no names",  The Apple uses less standby power and should not have a negative effect on your or your neighbors wireless equipment.  The Apple power output meets spec as well and is more linear until protection kicks in.  The Apple is just better and some "no names" are are just unsafe.