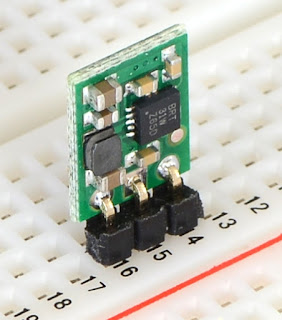 -----
Boost Converters are a type of switch power supply that magically turns a small DC voltage into larger DC voltage.  Learn about how that magic is preformed here.   Used properly they are great, but the magic of a boost converter does have it's limits.
-----
For the measurement setup a Keithley 2230 power supply is set to 1.5VDC (think AA battery voltage) to act as V(in) for the boost converter.  A Keithley DMM7510 HiRes multimeter is used to measure the ripple on V(out).  A Keithley 2450 SourceMeter SMU is used to simulate a load on the boost converter in static and swept mode. The Keithley 2450 also produces a V(out) graph under the swept load. 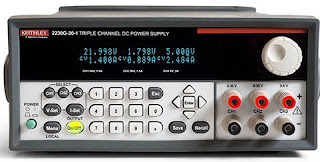 -----
The video shows how the 5VDC boost converter starts performing poorly at loads close to 100mA.  The output voltage begins to drop and ripple frequency increases as the boost converter works harder under the higher loads.  The Keithley 2450 is set up to graph the boost converter voltage output as it simulates the swept load.
-----
[EDIT: February 20, 2016]: We got a comment that the boost performance could have been effected by not having a constant 1.5VDC input into the converter during the entire load sweep due to lead resistance.  Turns out the comment was correct.  We retested the same boost converter with 4-wire measurement connections at both the INPUT and OUTPUT.  This 4-wire setup reduces any errors due to lead resistance.  The video below shows the improved result.  Measurement setup is everything!!!
-----